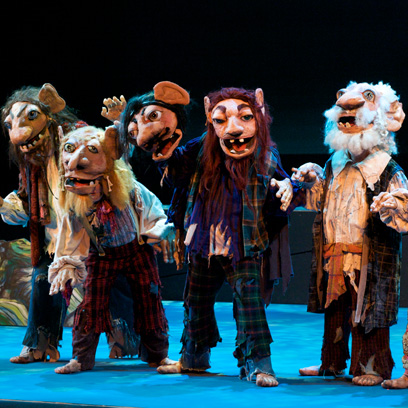 Tómas and the Library Lady by José Cruz González adapted from the book by Pat Moya, commissioned and premiered at Childsplay, wins the Distinguished Play Award from the American Alliance of Theatre and Education.

The Smartest Girl in the World by Miriam Gonzales, workshopped through Write Now and premiered at Childsplay, wins the Distinguished Play Award from the American Alliance of Theatre and Education.

The U.S. Department Of Education awards Arizona State University a 4-Year $2.2 million grant to work with Childsplay on an innovative drama and literacy program. The Assistance for Arts in Education Development and Dissemination (AAEDD) grant will support experimental design around arts-based professional development for teachers in 90 preschool classrooms across the Phoenix metro area.

The Miraculous Journey of Edward Tulane by Dwayne Hartford, adapted from the book by Kate DiCamillo, commissioned and premiered at Childsplay, wins the Distinguished Play Award from the American Alliance of Theatre and Education.

The Sun Serpent by José Cruz González, commissioned and premiered at Childsplay, wins the Distinguished Play Award from the American Alliance of Theatre and Education.

The play With Two Wings - written by Anne Negri and premiered at Childsplay - receives the Distinguished Play of the Year Award from the American Alliance of Theatre and Education.

Childsplay and Encanto Elementary School receive a four-year grant from the U.S. Department of Education to implement and evaluate a model for integrating theatre arts across three different language streams: mainstream classes, structured English immersion classes, and dual language classrooms where the pedagogy is half-and-half English and Spanish.

The Doris Duke Charitable Foundation awards Childsplay $155,000 to implement The “El Puente Project," a project focused on building demand for the performing arts through work with Resident Artist, Zarco Guerrero.

The Helios Foundation awards Childsplay a substantial grant to implement its Early Youth Educators at Play (Eye-Play) program in pre-school classrooms throughout the greater Phoenix area. The program introduces pre-school teachers to experiential learning techniques that encourage literacy learning for 3 to 5 year olds.

Childsplay receives a “Think It” grant from Theatre Communications Group to create new ways to build scenery that is more environmentally friendly.

Childsplay receives a four-year $1 million grant from the U.S. Department of Education to implement, evaluate, and disseminate a model for integrating theatre arts across the middle school curriculum.

Childsplay performs its world premiere production of Tomas and the Library Lady for First Lady Laura Bush at the Guadalupe Boys & Girls Club. The play was also invited to the national conference of the American Library Association.

The play Eric and Elliot - written by Childsplay Associate Artist Dwayne Hartford and premiered at Childsplay - receives the Distinguished Play of the Year Award from the American Alliance of Theatre and Education.

American Theatre magazine names Childsplay one of the top four theatre companies for young audiences in the United States.

The play And Then They Came for Me receives the Shofar Zakhor Award of the Phoenix Holocaust Survivors Association.

Childplay is named the United States nominee for the President's Award of ASSITEJ, the International Organization for Theatre for Young Audiences.

David Saar receives the Distinguished Play Award from the American Alliance for Theatre and Education for his play The Yellow Boat.

Achieved Basic Aid status with the Arizona Commission on the Arts, as one of the ten leading arts organizations in Arizona.

Childsplay was named Arts Organization of the Year by the Phoenix Business Volunteers for the Arts.

The Yellow Boat, was recognized at the Best Production for Children, Best Production of a New Work, Best Script by an Arizona Playwright, and Dwayne Hartford Best Male Supporting Performance, by the Greater Phoenix Theater Critics Circle awards

Received one of the first eight grants awarded nationally by the Lila Wallace/Readers Digest Fund for theatre for young audiences to create the new play Hush: An Interview with America.

David Saar receives Arizona Governor's Arts Award for his contributions to the arts in Arizona.

Childsplay receives Special Recognition Citation from American Association of Theatre for Youth for continued excellence and effectiveness in the field of children's theatre.