Jeff began acting when he was 6-years-old, and didn’t

stop until he quit cold-turkey at age 30. Since then, he

has continued working in nonprofit, looking for new ways

to bring creativity and beauty into the world and make an

impact. For the first time in nearly two decades, he is

going to take the stage one more time to raise funds

for Childsplay, the theatre company he called home for years.

For one-night only, Jeff Goodman will be performing

Double Threat, a concert of songs that inspire him and help

tell his story. Join us at the Herberger Theater Center on

February 18 for a night of song and (…well, just songs) to

support world-class theatre experiences for kids of all ages.

6:00 pm: Enjoy a glass of wine and a snack on the Herberger patio.7:00 pm: Curtain Up in the Herberger Theatre’s Stage West8:15: VIP Ticket Holder’s reception

VIP tickets include priority seating, a signed poster, and a wine reception after the performance.

So, you’re not a VIP. You’re still special, just seated a little further back (it’s a small theatre.)

***Please include DOUBLE THREAT in the memo box! 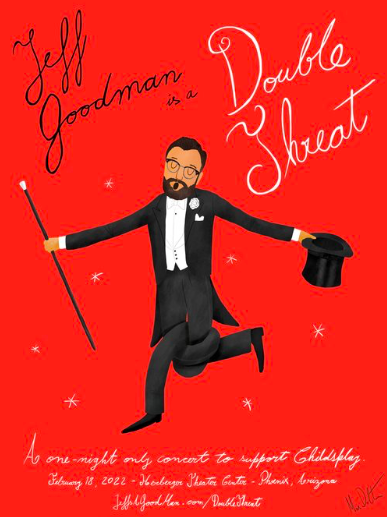 Some of Jeff’s favorite shows in his time at Childsplay included Still Life with Iris (Mozart),

And Then They Came for Me, Perô or the Mystery of the Night (Perô), Eric & Elliot (Eric), and Schoolhouse Rock Live.

back to all Special Events >